Risks to my business

Labour exploitation and abuse is happening across Scotland, here and now. It’s happening in rural areas, in cities and towns.

As an owner, manager or employee, it’s important to understand the very real threat labour exploitation poses to your business. Labour exploitation is a serious criminal offence, regardless of whether people actively pursued exploitation and abuse or unwittingly facilitated it. Regardless of circumstance, the damage to a company’s reputation is also potentially huge, as clients and customers question your organisation’s ethics and values.

The legal requirement for UK businesses is set out in the Modern Slavery Act 2015. Section 54 of the Act requires all commercial organisations with a turnover of £36 million or more to produce an annual Slavery and Human Trafficking Statement setting out the steps they have taken to prevent modern slavery in any part of their business and supply chain. This legislation applies in Scotland as it does in the rest of the UK.

The requirements of the Statement include:

This is the minimum requirement. 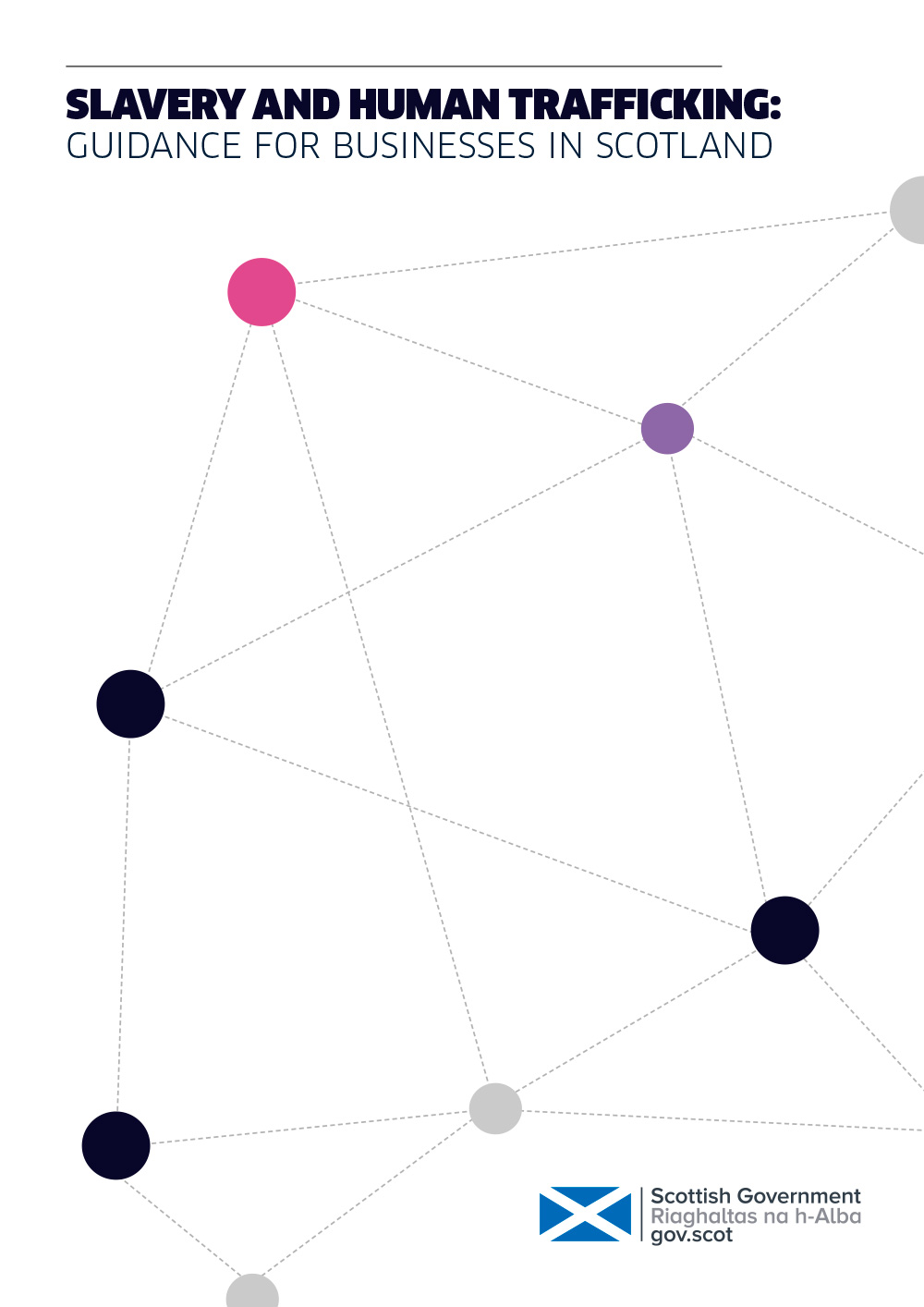 Download the Scottish Government’s Labour Exploitation Best Practice Guide for Businesses for detailed information on how you can guard against labour exploitation in your business and supply chain.

For businesses with a turnover below £36 million, there is no legal requirement to publish a statement. But it’s still advisable to take action to address the risks of human trafficking. Organisations who are in the supply chain of those required to publish statements, are likely to be asked to demonstrate what actions they are taking as part of ongoing supplier selection and management processes. The Home Office has produced ‘Transparency in Supply Chains – a Practical Guide’. This is not a legal document but does provide some specific guidelines.

Download the Scottish Government’s Labour Exploitation Best Practice Guide for Businesses for detailed information on how you can guard against labour exploitation in your business and supply chain.

Any organisation, large or small has a duty of care for direct employees. But you should also consider every single worker in your supply chain. If you regularly sub-contact or are involved the processing, packaging or transportation of goods from one location to another, it’s your responsibility to know who you’re working with and how they fulfil their contract with you, including the sourcing of staff by recruitment agencies. Proactively protect your business from the crimes of others.

If you suspect labour exploitation is occurring in your business or supply chain the worst thing you can do is ignore it. Equally, don’t try and challenge potential offenders yourself. Report immediately to Police Scotland who, together with our partners, will investigate fully and provide support to any victims identified.

Labour exploitation doesn’t only victimise individuals. It also involves criminal practices that skew the market, lending unfair competitive advantage to unscrupulous companies at the expense of other businesses. Businesses like yours. If you have concerns about a competitor in your sector, please share your suspicions.

Best practice for those employing workers

The Gangmasters and Labour Abuse Authority (GLAA) licence those employing seasonal, short-term and temporary labour in Scotland across a number of sectors including farming, food processing, factories and packing businesses. They provide helpful information on best practice for employers.

If you supply workers to other businesses, information on your legally enforceable licencing obligations are found on the GLAA website.

On 5 July 2019, eight members of a Polish criminal gang were convicted of slavery, trafficking and money laundering offences. They were part of the largest modern slavery network ever to be uncovered in the UK.

Although Operation Fort, the ongoing investigation run by West Midlands Police, identified 92 potential victims, police estimate that as many as 400 Polish nationals could have been exploited. Their ages ranged from 17 to a man in his sixties. Most had little or no English language skills. Operation Fort is similar to many other modern slavery cases in that it involves many different types of crime, including modern slavery, human trafficking, fraud, deception, theft and physical abuse. All parties, including law enforcement, non-governmental organisations (NGOs), banks, retailers, suppliers and labour providers can learn from this difficult experience.

The traffickers targeted vulnerable victims in Poland, luring them to the UK with the promise of well-paid jobs and accommodation in the Birmingham area. On arrival, they were forced to live in squalor and work long hours in farms, factories, waste recycling plants and parcel sorting warehouses. In addition, some victims were forced to work extra hours carrying out building and maintenance work on a number of properties owned by the criminal network.

The perpetrators lived a life of luxury, buying designer clothes and high-end cars. It is estimated that they made more than £2m between 2012 and 2017. But they paid victims as little as £20 a week, forcing them to live in cramped, vermin-infested accommodation. Some properties had no working toilets, heating, furniture or hot water and victims were forced to wash in canal water.

Victims were fed out of date food and forced to scavenge for bedding and mattresses to sleep on. One was denied medical treatment and painkillers after an accident at work. Starving, beaten and fearful of threats to their families, many were relying on food banks and soup kitchens to survive. All the victims are now living with the long term physical and psychological scars of their ordeal.

When it came to trial, lead prosecution barrister, Caroline Haughey QC, described Operation Fort as the largest human trafficking investigation ever to be undertaken in Europe. Judge Mary Stacey said that the crimes had been carried out at an “almost industrial scale”.

Operation Fort is important not only because of the number of victims, but also the length of time the criminal gang was able to operate without disruption. The gang’s activities can be traced back to at least 2012 and continued long after the passing of the Modern Slavery Act in 2015.

The supply of temporary labour to the UK’s agriculture and food processing sectors is more tightly regulated than other parts of the economy, requiring temporary labour providers to be licensed by the Gangmasters and Labour Abuse Authority (GLAA).

Nevertheless, the criminals were able to routinely supply exploited labour to retailer supply chains with little risk of detection. It is also significant that the crime occurred within the first tier of retail supply chains. Consumer-facing organisations tend to be more advanced than other sectors in conducting due diligence and understanding supplier risk.

Operation Fort sends a clear warning that no supply chain is safe from worker exploitation.

From the introduction to Operation Fort: What businesses should learn from the UK’s largest anti-slavery prosecution – UK Anti-slavery Commissioner, 2020